Continuously ranked as Philadelphia’s top feeder market for overseas visitation, with more than 108,000 visitors to the city in 2017, the Philadelphia Convention and Visitors Bureau travelled to the United Kingdom to promote visitation to Philadelphia. Key meetings with government officials and corporate representatives, in conjunction with Mayor Jim Kenney’s office, were part of the itinerary, which spanned two weeks in late October and early November. PHLCVB leadership met with executives from American Airlines and British Airways in order to discuss transportation and accessibility between the two destinations. The PHLCVB works closely with Philadelphia International Airport to achieve this goal.

END_OF_DOCUMENT_TOKEN_TO_BE_REPLACED

The US city of Philadelphia is proud to announce that it has been shortlisted in the ‘Best City Break for Families’ category at the Family Traveller Awards 2018. END_OF_DOCUMENT_TOKEN_TO_BE_REPLACED

Direct spending by overseas visitors to the city of Philadelphia increased by 7.2% in 2017, with travellers from the UK representing one of the top inbound markets.

END_OF_DOCUMENT_TOKEN_TO_BE_REPLACED 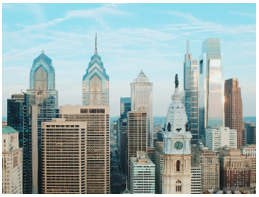 The Philadelphia Convention & Visitors Bureau (PHLCVB) has announced that it will participate at TravMedia’s International Media Marketplace 2019 on 25 March 2019 at London’s QEII Centre in Westminster.

END_OF_DOCUMENT_TOKEN_TO_BE_REPLACED

With the Edinburgh Festival Fringe coming to a close, Philadelphia CVB is encouraging UK travellers with a passion for performance art to head to the ‘City of Brotherly Love’ this September for its very own Fringe Festival showcasing local, national and international artists as well as ground-breaking world premieres.

END_OF_DOCUMENT_TOKEN_TO_BE_REPLACED

Coco Bodu Hithi has teamed up with Sunnylife, the Australian company that has become one of the world’s leading summer lifestyle brands, to introduce the world’s first Pool Floats Menu.

Featuring an eclectic selection of Sunnylife’s colourful, whimsical, and stylish inflatable swimming pool floats, this unique menu is sure to be a hit with everyone, from young ones to those young at heart.

Martin Lount, General Manager at Coco Bodu Hithi said “We’re extremely excited to be working with Sunnylife to kick off our summer pool floats programme and offer this one-of-a-kind menu experience. Our guests love to share pictures of their holiday with friends on social media, and with over 12 different styles on offer from our pool floats menu, we’re excited to see what they’ll be posting online!” Available exclusively at Coco Bodu Hithi, the collaboration with Sunnylife is the perfect way to be the envy of all your friends this summer and capture insta-worthy moments in the sun!

Conceived on the beaches of Sydney, the brand was established with a simple goal: to share Australia’s authentic summer style with the rest of the world. Today their products can be found on beaches, in pools and at sun drenched holiday destinations across the globe.

Sunnylife is recognised for its vast seasonal collections featuring every must-have summer item imaginable. Fashion referenced bold graphics, showstopping prints and trend-setting packaging are all part of our trademark signature. They are committed to creating a range of sunny essentials that deliver on innovation, quality, style and functionality; the perfect summer range solution.

The Philadelphia Convention & Visitors Bureau (PHLCVB) is pleased to announce that Philadelphia will host the 2018 Irish Travel Agents Association (ITAA) Annual Conference, which will take place in November 2018.

Announced during ITAA’s Irish Travel Trade Show in Dublin on 12 April 2018, the Conference in Philadelphia will offer agents the opportunity to strengthen relationships with travel professionals throughout Ireland and to enjoy a first-hand experience of what Philadelphia can offer to Irish holidaymakers.

This is an exciting year for Philadelphia, with the city welcoming several new tourism developments in 2018 including a new direct service from Dublin with Aer Lingus, which will join the already established year-round direct flight service from Dublin and seasonal service from Shannon with American Airlines. There will also be several new hotel openings such as the brand-new Four Seasons Hotel Philadelphia at the city’s new 60-story Comcast Center, providing guests with sky-high views of the city, and Starwood’s new dual-branded W and Element Hotels, which will be located at 15th and Chestnut Streets.

Pat Dawson, CEO of the ITAA said, “This will be the first time the ITAA Conference has taken place outside of Europe and we expect the conference to sell out quickly. Philadelphia is an exciting and vibrant city, and the new direct service from Aer Lingus makes it even more accessible to Irish travellers.”

Greg Evans, Account Director for the UK & Ireland for PHLCVB added, “This is a great accolade for the city and with direct services with American Airlines and Aer Lingus from Dublin and an additional American Airlines seasonal service from Shannon, the timing of hosting the event couldn’t come at a better time. It will be an excellent opportunity to showcase the city and surrounding areas to the Irish Travel Trade.”

The ITAA has represented Ireland’s Travel Agents and Tour Operators since its founding in 1971 and brings together approximately 100 member companies covering 140 branches in different towns and cities throughout the Republic of Ireland.

Celebrating its address in the heart of the city’s vibrant Annex neighbourhood, Kimpton announces its first ever Toronto hotel, Kimpton Saint George, located at 280 Bloor Street West between Huron and St. George Street, will open in Summer of 2018.

Now taking reservations for stays commencing July 1, the highly anticipated addition to Bloor Street’s Culture Corridor will pay homage to the community’s history and honour its location at the intersection of arts, culture, and expression. “Toronto is one of the most dynamic cities in the world right now with its own distinct identity and culture, making it a perfect home for Kimpton,” said Ron Vlasic, Vice President of Kimpton Hotels & Restaurants. “We’re thrilled to be opening the first boutique hotel that embodies the essence of the lively Annex neighbourhood, in the hub of the city’s arts, culture and dining scene.”

As North America’s boutique hotel pioneer, Kimpton is known for embracing a locally oriented approach to its design, service and guest experience in all its 66 locations. With forward-thinking, residential-inspired design, want-for-nothing amenities and heartfelt service, Kimpton Saint George will embody all the hallmarks of an authentic Kimpton experience and proudly showcase the brand’s success in re-inventing existing structures and imagining boutique hotels that garner civic pride.

Located amidst Toronto’s world class museums and attractions including the Hot Docs Ted Rogers Cinema, Bata Shoe Museum, Gardiner Museum, Royal Conservatory of Music and a litany of independent shops, cafes, galleries and arts institutions ripe for exploration, Kimpton Saint George will offer its guests access to Toronto’s multi-faceted cultural scene in one of its most notable districts.

Reservations are currently available for dates of stay starting July 1. As the hotel moves closer to completion, earlier dates will open for availability. For more information, visit www.kimptonsaintgeorge.com and follow along on the hotel’s journey to its summer opening on Facebook and Instagram.

The Greg Evans Consultancy (GEC) has announced that Julie Greenhill will join the consultancy as a Director with effect from 01 January, 2018.

Greg Evans said “Julie will bring a wealth of experience and skills on board and I look forward to working with her.”

Julie has a wealth of experience crammed into her 34 years within the UK Travel Industry. Holding various roles including product and marketing managerial posts for the USA, Canada and the Caribbean.

Julie has worked in representation since 2007 and has gained respect for her knowledge and expertise. During this time, she has shared her knowledge and enthusiasm about the USA with the travel trade, journalists and consumers as to the wonders of the USA including destinations such as the Commonwealth of Massachusetts, Texas, Scottsdale, Louisiana and the Deep South.

Greenhill said “I look forward to working on new and exciting projects with Greg and the rest of the team. We will focus on building and maintaining the relationships that GEC has worked hard to establish over the past 6 years and developing new opportunities for GEC. This is a busy and exciting time for the company and I am looking forward to the challenges that lie ahead.”

Please drop by and say Hi to GEC and visit our clients on Booth NA340-2 at Excel between the 06th & 08th November.

LOVE Is in the Air in Philadelphia This Valentine’s Day
January 6, 2020 / GEC

Feel the Love This Christmas With Fabulously Festive Events in Philadelphia
December 11, 2019 / GEC

How can we help you